When Kawasaki’s original W, the W1, appeared in 1966 it was the largest-displacement Japanese model of its time. Not only did it mark Kawasaki’s first step in becoming a manufacturer of large displacement motorcycles, its design goal of becoming the fastest bike in the world was a precursor to Kawasaki’s Quest for Speed and led to the birth of legendary machines like the Z1, Ninja, ZZR1100 and Ninja H2/H2R. By today’s performance standards the W1 would not be considered a fast bike, but in its day simply riding a big bike was enough to turn heads and earn the respect of fellow riders and pedestrians alike. For riders who prefer a leisurely ride at low speed, with the throbbing pulse and throaty roar of an air-cooled Vertical Twin engine playing counterpoint, Kawasaki is proud to present the new model that was designed to capture the look and feel of this iconic bike from yesteryear. The new W800 STREET is the latest evolution of a brand that spans 50 years. With numerous parts updated compared to the W800 SE, the W800 CAFE the retro models have been thoroughly modernised to deliver rider-friendly machines with easy handling and good stability on the highway. But not all of the changes are visible – Kawasaki’s dedication to preserving the image of the original model can be seen in the air-cooled Vertical Twin engine that meets strict modern emissions standards, the double-cradle frame with completely revised rigidity care of thicker pipe walls, and the carefully crafted exhaust sound of a Vertical Twin with a 360° crankshaft. For a taste of history, look no further than the W800 STREET. While maintaining the vintage ride feel of a true classic machine, 18” wheels front and rear contribute to handling slightly sportier than that of the original W800, whose 19”/18” front/rear combination offered unhurried steering. The voluptuous curves of the fuel tank naturally draw the eye, making it another key styling element. Its larger volume (increased from 14 litres to 15 litres) gives it more presence, creating a more powerful impression than its predecessor. The twin mufflers were carefully tuned to bring out the characteristic note of the Vertical Twin’s 360° crankshaft engine configuration – a configuration maintained from Kawasaki’s original W – creating a hearty roar to complement every twist of the throttle. The black wider aluminium rims add to the W800 CAFE’s composed highway handling and style. Lightweight aluminium rims are highly resistant to corrosion. The spokes and nipples are treated with a special finish that allows dirt to be simply wiped off. Tube-type bias tyres offer a traditional tread pattern and high grip. Simple front and rear fenders contribute to the bikes’ sporty looks, while their simple design provides an excellent base for customisation. A blend of retro and modern designs, the large ø170 mm LED headlamp casts a bright, white light for great night-time visibility. Position lamps in the high-beam chambers ensure the whole lamp appears lit, like a retro-style bulb headlamp. Details like a convex lens and chromed headlamp ring add to the high-quality, classic design. While the double-cradle frame looks unchanged from its predecessor, it is in fact all new. The required rigidity of each and every piece was re-evaluated. Then, while keeping the pipe outer diameters unchanged, the pipe thicknesses were adjusted as necessary. Round tubes with a smooth finish and minimum welds and gussets contribute to the quality appearance. The addition of an Assist & Slipper Clutch offers both a much lighter feel at the lever, as well as a back-torque limiting function that helps prevent rear-wheel hop when downshifting. The W-Brand is one of the Original Kawasaki Icons from the start in 1965.

*This website does show models that are not available in Australia. 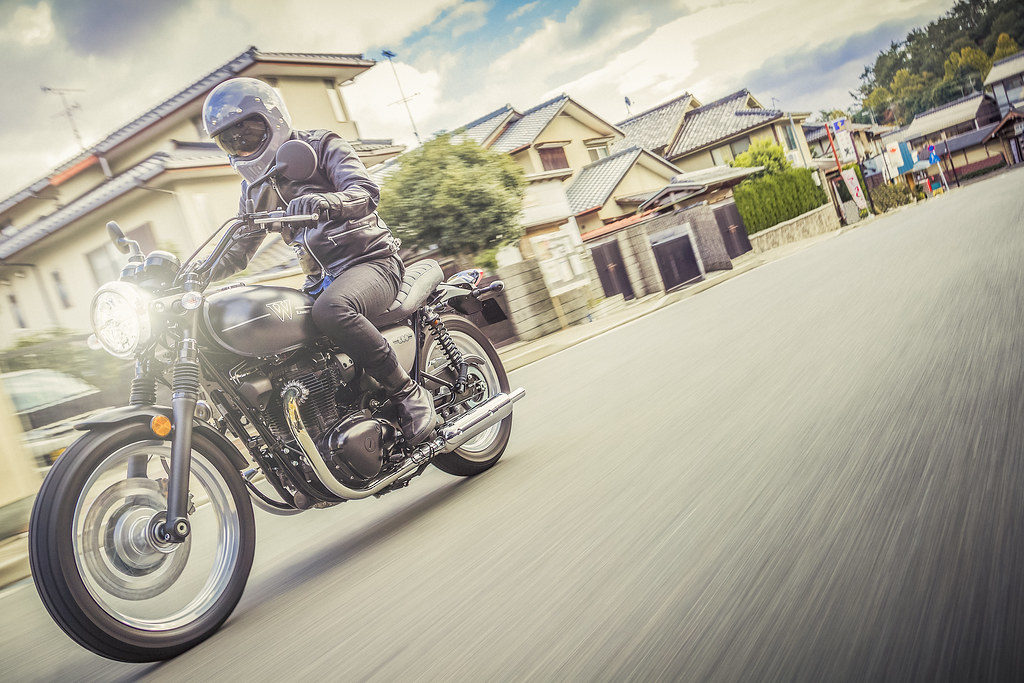